Death of My Childhood Dreams 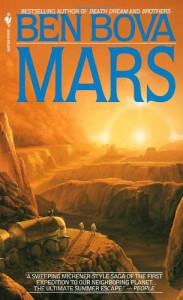 What an utter disappointment. Childhood Me is sitting in a corner, sobbing. Adult Me is just totally amused at how such an interesting concept can go so wrong in so many different ways.

For people who think all scifi sucks, that it's just a bunch of robots wandering around technobabbling and being hideously racist and sexist, this is not going to make any new believers.

2 stars, and all those stars are for the scenes on Mars that deal with MARS not the automatons masquerading as explorers.

You better'd BELIEVE this will have a full review - I've owned the paperback copy for over 4 years and have dreamed of landing on Mars for over a decade.

Jaime Waterman is half-Navajo and full renowned geologist heading as one of a dozen explorers to Mars. The international team lands on Mars, explores, makes way for Jaime "Marty Stu" to call all the shots, comes down with a STUPID disease, and then gets stuck in a crater - perfect for Jaime Stu to come and save the day.

My childhood dream was to go to Mars. I dreamed that I would be an engineer on a first Mars mission (I think my goal was to have landed THIS YEAR). I came up with my first words for my first landing, imagined who my teammates would be, planned out what foreign language I would learn (Russian, of course)...

And then I grew up and realized that things change when you grow up. There is a part of me that would still LOVE to be the first to step foot on Mars, but given the decimation of the US Space Program, that dream is even further into the future. This is what I used to dream.

So as a last vestige of the wide-eyed, imaginative girl that I once was, I bought this book. A friend recommended it as well, so I bumped it up the list. And then I nabbed an audiobook at the library and squeezed it into my packed reading schedule.

Let's imagine this graphically, shall we? I have compiled a TOTALLY LEGIT and SCIENTIFICALLY OBJECTIVE graph for this experiment:

Let T= Percentage through Book, R=Embarrassing Racism, X=Sexualization of every female, and S=Stupidity. Then if f(T)=E=Excitement for book, the formula is approximately:

"I hate Crystal Starr Light and want her to lose her effing mind!"

About the only thing it is missing is Little Green Men parading into the picture - but this is HARD scifi, not that wimpy soft stuff that has woowoo science and humanoid aliens.

I REALLY REALLY wanted to love this book. And I DID love it when Bova shut up about his awful, stupid characters, their awful, stupid drama and looked at the science and world of Mars. GREAT stuff, completely captivating. But if to get to that stuff it means I have to spend even an HOUR listening to Jaime call himself a "Red Man" or laugh about the "privilege" being a Native American gives him or comment on how childish Joanna looks all the while wanting to seriously bone her - UMKAY, I'm getting OFF this bus KTHXBAI.

Where Bova fails is the characters. They are weak, badly written, and dull. From Jaime Waterman to Ilona to Tony Reed to the Russian astronauts with difficult to spell last names (SORRY PEEPS, I listened on audiobook and have no ear for spelling out American names, much less Russian ones), all the characters are about as interesting as...hmmm, I would say a Martian rock, but those suckers are fascinating. How about coffee grounds? They have one note, one character and that's it.

And what's worse, when Bova attempts to create diversity, much headbanging ensues. I would applaud his non-white characters, his attempt to include women if they weren't SO BLAND! If they actually FELT like non-white, non-American characters, instead of whiteboards painted with green and yellow and orange paint! If the women weren't all grouped into whores or madonnas.

And Jaime - God, I hate Jaime. He's our protagonist, which means everything he does is perfect and wonderful. He thinks there is something to be discovered in the Grand Canyon of Mars? The WHOLE MISSION PLAN must be changed so they can investigate - who cares if Patel has other plans that he has spent DECADES on, nope, gotta follow Jaime's intuition! Jaime can sleep with Ilona, but Eddie sleeping around, even though they aren't in a committed relationship? WHORE!

The other grating part of the story is the ludicrous "Mars virus" that the crew catches.

HINT 2: The meteor shower that happens earlier in the book is the cause of this "virus" - a twist that MIGHT have been clever had the disease NOT been one that takes at least 3 months to actually show signs! And even then, it's nowhere near as deathly as is shown in the book!

As for the plot: well, it's dated. A bunch of late 80's/early 90's politics crammed into a scifi book. It was mildly amusing in places, but not very believable or well-done. After awhile, I just wanted it to be OVER.

And of course, the only female high-ranking official is a cutthroat b!tch. (I wouldn't have a problem with this if there was more than one female politician - women can be b!tches too after all!)

This was narrated by Stefan Rudnicki, who had read the "Something Wicked This Way Comes" that I was greatly underwhelmed with. The good news is that he didn't completely bore me with this book as he had with the previous (Obviously I don't care for Bradbury in audiobook form). The bad news is, his accents are silly, and in one case, he gives a character a Russian accent when the text EXPLICITLY STATES that that character had no discernible accent. FAIL. Still, he does have a soothing voice, and it's not completely grating to listen to.

What is most disappointing is just how mediocre this book is. From a science standpoint, everything is sound and very probable. (Now politically, I sincerely doubt the crew would look this multi-national, but that's just me.) The subject is fascinating. It's the characters and plot that just flounder and flail. Boring. Racist. Sexist. Badly written. I will not be returning to Mars or any other planetary location with Ben Bova anytime in the future.