Some interesting information but not what I was expecting 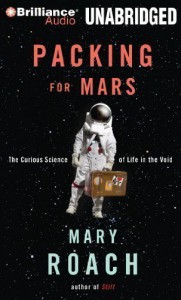 Huh. Not quite what I was expecting - more a "look at all these weird things in space" than anything close to a checklist of things necessary for a Mars mission. And those weird things seem to focus A LOT on bodily functions.

I wish we spent more time on how bad the food was, how hard it would be to store enough food and oxygen and more about the psychology of long duration flights. And less time on space poos.

I will try to do a full review, though I don't really know if that's gonna work.

I fell in love with all things space at the ripe old age of 11. I found a science textbook talking about space and started planning out my future like teenaged girls stereotypically plan out weddings. I would go to college and get my master's in aerospace engineering (learning Russian alongside it) then work at NASA where they would assign me as a mission specialist on a mission to Mars. I even had my little script of what I would say on Mars planned out. (In addition, I would fall in love with this equally smart guy who supported me and went along with me on the mission to keep me company.) I predicted all this would happen - well, now.

Obviously, life does NOT go like you plan at 11. I'm not stepping on Mars reciting my fabulously eloquent lines about how awesome it is to step on Mars, I don't work for NASA, and I didn't learn Russian (I know, I'm sad about that one too).

But I still have a soft spot for Mars. I still desperately want humans to reach out and go to Mars - even if it makes more economic and scientific sense to send robots. There is just something awesome about a group of people banding together for a peaceful goal that I love. It's what I pretend was going on during the American Lunar missions; I like to think something like this could still happen today, amidst the stupid Real Housewives reality shows and Adam Sandler's latest insult to humanity.

Mary Roach's "Packing for Mars" hinted that it might look at all the details needed to go to Mars. Well, the title anyway - the cover blurb makes it a bit more clear it's just about all the weird things in space that we take for granted on Earth.

And that's primarily what "Packing for Mars" is - a book about the strange way we work in space. Psychologically, biologically, and...biologically. Don't get me wrong, there was some fascinating stuff in here, about how people react in closed quarters to another person for extended time, about not bathing, about sexual relations in space, about eating squares of condensed food and what that does to your bowels, about urinating, about pooing...

And yet, I'm surprised we didn't discuss more about the massive engineering feat it would be to store enough food and water and oxygen for a THREE YEAR voyage to Mars.

I feel that Mary Roach spent SO MUCH time on all the "gross parts" of space flight, she really didn't touch enough on the parts I wanted - what is growing food in space like? Is it viable? How about storing food? Storing "souvenirs" from Mars? What does radiation do? I don't even know, it's just I felt the overwhelming take-away, at the end of the book is just going to the bathroom is gross and dehumanizing and I want to take a 4 hour shower.

Roach has a humorous, yet educated tone, which I appreciated. It also was a breeze to read this. But I am knocking down from my initial 4 stars rating because I realized that I have been thinking of this book as "It's okay" not "really liked it".

It's a decent book with some interesting information, don't get me wrong. It's just not really what I expected/wanted to read about - a disappointment, because I've been pretty much ecstatic about reading this from the moment I saw it debut in hard cover. To wait so long until I am on vacation reading only books I WANT to read just to find it was "Okay"? Disappointing just doesn't cut it.